by Robert Turek and Thomas Bund

A Comparison with the book American Racer…….. 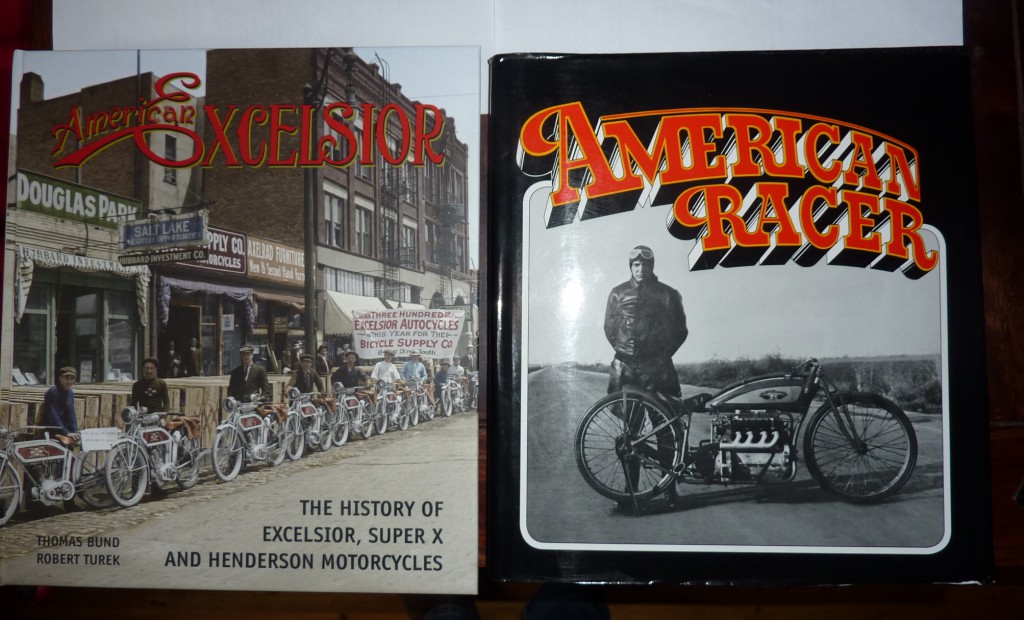 This is the first and only book in English about Excelsior!

Through the first few decades of the twentieth century the Excelsior Motor Mfg. and Supply Company was one of the three largest motorcycle manufacturers in the United States. They contested second place behind the dominate brand, Indian, in the teens, and were the third largest until ceasing production during the Depression. Although their commitment to racing waxed and waned, they were prominent in several forms of competition over the years right up to the end. The factory counted on a large portion of the sales to law enforcement, especially with their four cylinder models. Their styling always led their competitors, setting trends that would last for years, and their products were always of the best quality.

By Thomas Bund and Robert Turek
Reviewed by Tim Pickering.

Received my copy of the American Excelsior book last week. WOW!!!! What a treat! Of course it will take me years to read and understand it all, plus with my recent shoulder surgery, I have a tough time holding it up to read, as Steve said, it weighs all of 8 pounds! Never the less, I’ve been enjoying it from my desk top.

Thomas Bund and Robert Turek have done an incredible job of putting this book together! I’ve been studying Brand X for 25 years now and have not come close to their level of study. It is without a doubt the best books on antique motorcycles I have in my collection. It covers the Excelsior story from Schwinn’s early bicycle days in Europe to the end of the Chicago brand and beyond, to the modern X made in Minnesota. I’m very impressed with not only their research, but the amount of original literature they have collected and included in the book for reference. The quality of the not only the content, but also the printing and binding is outstanding! The book is LOADED with very high resolution images that are great to look at and study. Also quite a few tid bits that I was not aware of.

To many the price seems a bit steep, but it goes right along with my belief that the only people that bitch about the cost of a reproduction part for their old motorcycle (or a book in this case) are the ones that have never reproduced a single part (or book) and have no idea what goes into it.

So, if you’re truly interested in the history of Brand X, there is no finer book available. In fact, the only other one available that I know of is Thomas‘ first book American X, which I thought was outstanding, only problem is my German is not good enough to understand much of the text!

Best get on the order list, this is a limited printing..

„Murderdrome“  49.-Euro  This book has a direct link to the Excelsior History and it provides the history of Board Track racing (incl. 500 images) from the beginning in 1900. Just klick on the order. Don´t miss it!!